Waterloo to Exeter main line trains from the 1960s to the 1980s to be re-created ahead of this year's Swanage Railway diesel gala. 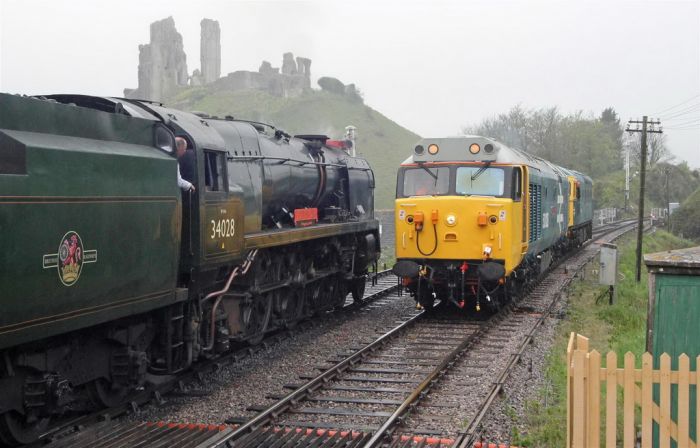 Trains on the Waterloo to Salisbury and Exeter main line from the 1960s through to the 1980s are to be re-created on the Swanage Railway - ahead of this year's annual three-day Diesel Gala and associated Dorset Beer Festival.

Before and after the gala, driver experience courses are also being offered on four of the visiting main line express diesel locomotives - a Class 24, two Class 50s and another visiting locomotive yet to be announced by event organisers.

And, the public will also have the chance to drive a Class 20 locomotive for just £20 on the one-mile stretch of little used line between Norden and the boundary with the national railway network at Motala, half a mile east of Furzebrook.

In addition to the Swanage Railway's two resident Class 33s, four visiting main line diesel locomotives have already been booked for the popular three-day gala event which takes to the rails in the Isle of Purbeck from Friday, 9 May, to Sunday, 11 May, 2014, inclusive.

And organisers of the popular annual gala - now in its ninth year - say that more visiting diesel locomotives will be added in the near future.

The day before the diesel gala begins, there will be a 'Day on the Mule' event re-creating the diesel and steam trains used on the London to Salisbury and Exeter main line - nick-named 'The Mule' - from the 1960s through to the 1980s.

The diesel gala's associated Dorset Beer Festival takes place at the Bankes Arms pub in Corfe Castle which overlooks the village square and also the railway.

Conveniently located off the approach road to Corfe Castle station and organised by the Bankes Arms, the beer festival will feature a wide variety of local beers and ciders.

The diesel gala will see an intensive three-train service operate between Norden Park & Ride, Corfe Castle, Harman's Cross and Swanage from 8am to 12 midnight on the Friday and Saturday - and from 8am to 7pm on the Sunday.

A main line express diesel locomotive will be on display at Corfe Castle station and available for cab visits in the form of Class 50 No. 50 035 'Ark Royal'.

Additional driver experience courses are also being offered on Class 24 No. D5081 and Class 50s No. 50031 and No. 50035, as well as another visiting diesel locomotive yet to be announced by diesel gala organisers.

As a taster ahead of this year's diesel gala, event organisers are staging a one-day re-creation of diesel and steam trains used on the London to Salisbury and Exeter main line - nick-named 'The Mule' - during the 1960s and 1970s.

The 'Day on the Mule' event takes to the rails between Norden Park & Ride, Corfe Castle, Harman's Cross and Swanage on Thursday, 8 May, 2014, with the special trains operating in addition to the scheduled blue timetable steam train service.

In a new addition to the diesel gala programme, there will be a model railway show in Harmans Cross village hall - conveniently located next to the station - on the Saturday and Sunday, with admission free for diesel gala rover ticket holders.

Organised in association with the Purbeck Railway Circle, the display of layouts will be supplemented with trade stands. Admission for non-diesel gala rover ticket holders is £2 for adults and £5 for families.

The grounds of Harman's Cross village hall is also the location for a fund-raising RNLI Fun Day on Sunday, 11 May, 2014, featuring emergency service displays and demonstrations.

This year's diesel gala supported charity is the RNLI's £200,000 Swanage lifeboat station appeal - which is raising funds for a new lifeboat station for the seaside town - and a Class D lifeboat will be on display at the three-day event.