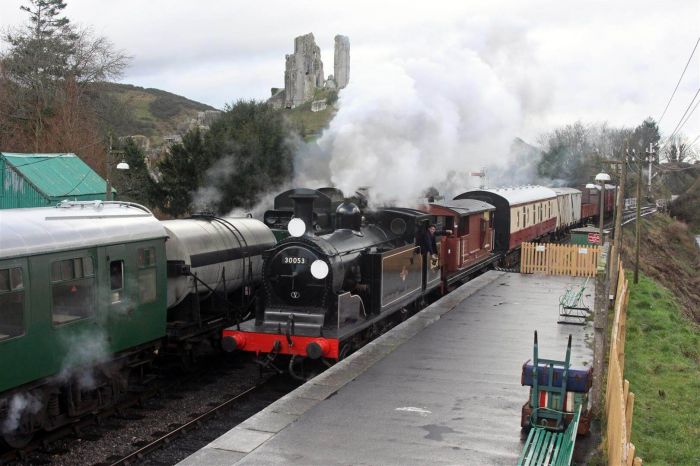 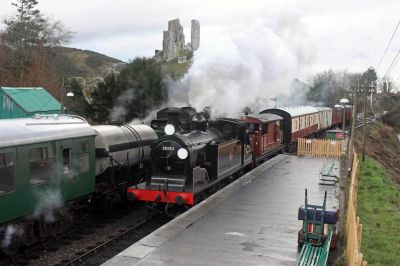 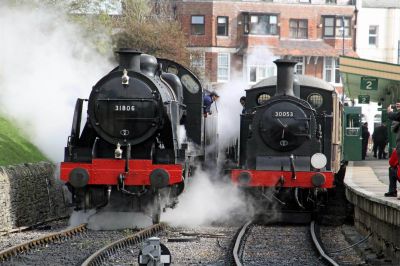 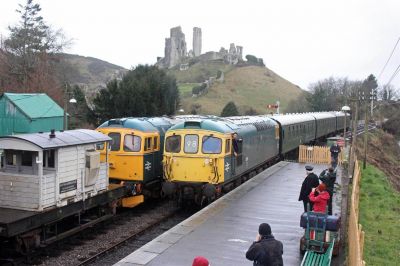 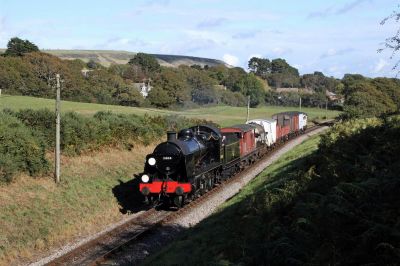 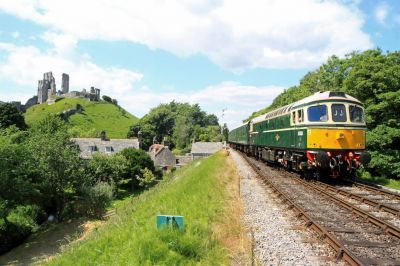 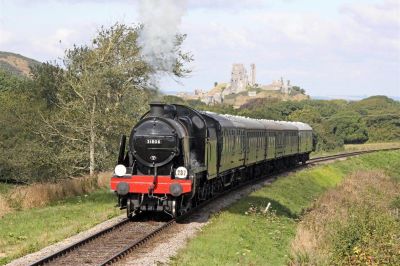 Classic steam and diesel locomotives – together with a nostalgic freight train – will be running through the Isle of Purbeck countryside thanks to a special 'Winter Warm Up' mini-gala day being staged as the perfect way to blow out the Christmas cobwebs.

The 'Winter Warm Up' bursts into life between Swanage, Herston Halt, Harman's Cross Corfe Castle and Norden Park & Ride on Saturday, 27 December, 2014, with trains running every 40 minutes between 10am and 5.20pm.

Swanage Railway General Manager Richard Jones said: "The public will be able to enjoy the nostalgic delights of classic steam and diesel locomotives – and an evocative freight train from yesteryear – against the beautiful backdrop of the Purbeck countryside and the dramatic ruins of Corfe Castle.

"It's the perfect way to blow away the Christmas Day and Boxing Day cobwebs – and escape the repeats on television or cold Turkey – by visiting the Isle of Purbeck for a really enjoyable, nostalgic and evocative day out.

"Visitors will be able to enjoy watching our steam and diesel locomotives working hard on our demonstration freight train – recalling years past when the railways were the backbone of our transport network, especially during the winter," he added.

Subject to availability, the featured 'Winter Warm Up' steam locomotives hauling the passenger trains will be Victorian-designed 1905 London and South Western Railway M7 tank No. 30053 and 1920s-built Southern Railway U-class No. 31806 – known as the 'U-Boat'.

No. 30053 hauled passenger trains for British Railways between Wareham, Corfe Castle and Swanage – as well as between Poole, Broadstone, Wimborne, West Moors, Ringwood and Brockenhurst – from late 1963 through to May, 1964, when it was withdrawn.

Newly resident on the Swanage Railway, No. 31806 hauled bucket and spade holiday trains from Basingstoke, Eastleigh and Eastleigh to Corfe Castle and Swanage during the 1950s.

No. 33 111 made history in September, 1971, when it hauled the last 'push-pull' train from Bournemouth to Corfe Castle and Swanage – three months before the branch line was controversially closed and demolished – while No. D6515 hauled London to Swanage trains during the mid-1960s.

Richard Jones explained: "Our 'Winter Warm Up' event offers something a special to the public between Christmas and the New Year when many people are on holiday with their families and wanting to enjoy a day out with a difference in the Isle of Purbeck.

"Our Victorian M7 tank and 1920s U-class tender locomotive – as well as our two classic early 1960s Southern Region Class 33 diesel-electric locomotives – will be working an intensive timetable of trains throughout the day," he added.

With the railway shop open at Swanage station, hot drinks and snacks will be available at the Swanage and Norden station buffet coaches.

The fascinating goods shed museum and exhibition coach at Corfe Castle station will also be open.

Go anywhere Day Rover tickets for the 'Winter Warm Up' event are just £15 for adults and £10 for children giving unlimited travel on the day of issue – meaning that visitors can go where they like, when they like.

Day return tickets offering a round trip on the Swanage Railway are also available.

​Swanage Railway train times – and special event details – are available online at www.swanagerailway.co.uk or by telephone on 01929 425800.