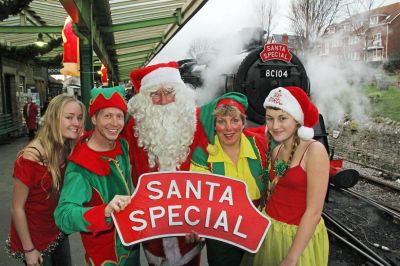 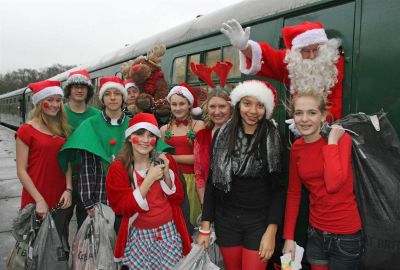 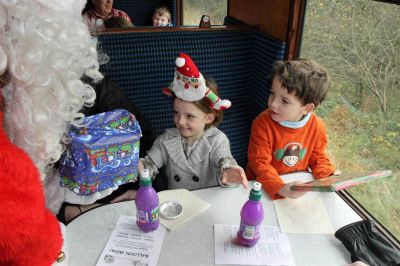 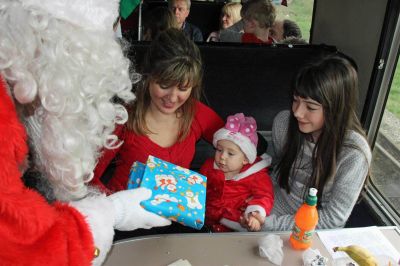 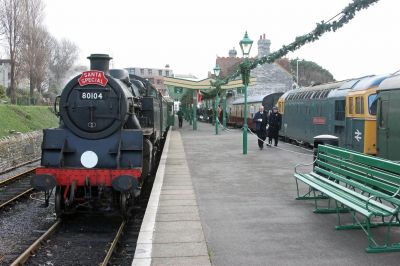 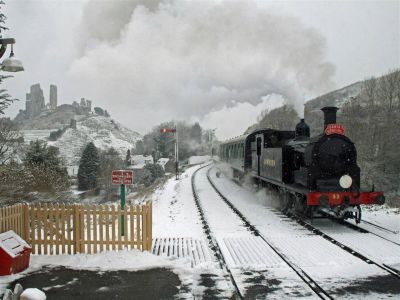 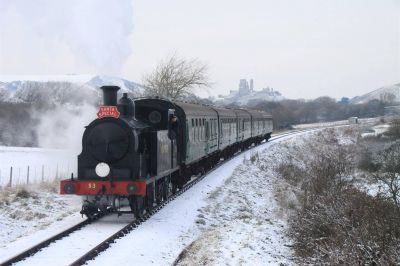 Dedicated Swanage Railway volunteers are to start running the first of 44 fund-raising 'Santa Special' steam trains in the run-up to Christmas Day – with the popular services running a total distance of 530 miles through the beautiful Purbeck countryside.

With Father Christmas and his helpers on board, the 'Santa Specials' will be spreading festive cheer – for children and adults alike – during the last weekend of November, every weekend in December during the run-up to Christmas Day and also on 22, 23 and 24 December, 2014.

With trains departing Swanage at 10.30am, 12.05pm, 1.40pm and 3.15pm for the 12-mile one-hour round trip via the picture postcard village of Corfe Castle, seats on some of the festive trains are still available – along with some 'Dorsetman' three-course Christmas Luncheon trains.

Passengers can leave their vehicles in the attended Purbeck District Council car park next to Norden station, located off the main A351 road from Wareham, and board a heritage diesel train for the six mile 25-minute journey to Swanage and a connection with their 'Santa Special' steam train.

Last year, 8,631 people travelled on the 'Santa Special' steam trains run by volunteers and assisted by a small team of paid staff – the total number of passengers being more than the combined populations of Wareham town and the village of Corfe Castle.

This year's 44 festive trains spreading pre-Christmas cheer will be steaming a total distance of 530 miles, the equivalent distance from the Isle of Purbeck to the Atlantic port city of Bordeaux in southern France.

Youngsters will receive a wrapped present relevant to their age from Father Christmas while passengers will receive festive refreshments on board the 'Santa Specials' – a glass of sherry and a mince pie for adults as well as a biscuit and soft drink for children.

Swanage Railway volunteers are also running 'Dorsetman' three-course Christmas Luncheon trains on the last weekend of November and also during December weekends up to Christmas Day – including 23 December.

Some tables are still available and the special dining trains departing Swanage for two round trips at 12.40pm.

Proceeds from the 'Santa Special' trains go towards the extension and development of the award-winning Swanage Railway which has been rebuilt from nothing since 1976 and last year carried more than 211,000 passengers.

Swanage Railway General Manager Richard Jones said: “We've been running our popular 'Santa Special' steam trains for almost 30 years and their magical on-board atmosphere is the perfect way to enjoy the build up to Christmas Day. They are equally popular with children and adults alike.

"Passenger surveys carried out on our 'Santa Special' trains revealed a satisfaction rating of 94 per cent and a 97 per cent rating for the friendliness for the team of dedicated volunteers that makes the very special trains happen," he added.

Tickets for the Norden Park & Ride to Swanage heritage diesel trains, which connect with the 'Santa Special' steam trains, are £3.50 for adults with children free when diesel shuttle tickets are booked with 'Santa Special' tickets.