A new recruitment and retention officer has been appointed to attract volunteers to the Swanage Railway – as well as the Wareham and Wool main line station support groups – thanks to a grant from South Western Railway’s Customer and Communities Improvement Fund.

Based on the award-winning heritage line at Swanage station, the two-year full-time paid appointment will see Jonathan Evans working with the Purbeck Community Rail Partnership and South Western Railway in setting up a new support group for Moreton station.

Rebuilt over more than 30 years since 1976 – after the ten-mile branch line from Wareham to Corfe Castle and Swanage was controversially closed by British Rail and the tracks lifted in 1972 – the Swanage Railway currently has more than 400 regular volunteers.

The Swanage Railway’s director for volunteers Trevor Parsons said: “We are delighted to welcome Jonathan to this new and important volunteer recruitment and retention role which has been made possible thanks to the support of the South Western Railway’s Customer and Communities Fund for which we are very grateful.

“The Swanage Railway has been rebuilt from nothing since 1976 thanks to mainly volunteers who are the lifeblood of the heritage line with volunteering, in general, contributing to the vibrance and cohesion of our communities.

“We look forward to Jonathan working with the Purbeck Community Partnership and South Western Railway for the benefit of not just the Swanage Railway but also the main line stations at Holton Heath, Wareham, Wool and Moreton on the main London to Weymouth line,” added Trevor who is a volunteer guard and signalman on the heritage line as well as a trustee with the Swanage Railway Trust charity.

South Western Railway’s Customer and Communities Improvement Fund manager Veronika Krcalova said: "Here at SWR, we’re passionate about volunteering. Not only does volunteering enable people to gain valuable new skills and experiences, it also helps to connect people with similar values and interests. That’s why we’re delighted to support the Swanage Railway and the PCRP with the funding required for this important role."

“Made possible thanks to the support of South Western Railway’s Customer and Communities Improvement Fund, this new volunteer recruitment and retention role is an exciting and challenging one that allows me to work with the Swanage Railway as a whole and understand the structure and responsibilities of each department and group.

“I look forward to working with the Purbeck Community Rail Partnership, its community rail officer Josephine Foley and the support groups at the main line stations for Wareham and Wool as well as setting up a new support group for Moreton station.

“I love the idea of what the Swanage Railway has achieved over the past 45 years as well as the exciting plans that it has for the future that will place the heritage line firmly at the heart of local communities across the Isle of Purbeck.

“Being a part of that is a wonderful and very rewarding feeling while being a volunteer signalman means that I am involved in the signalling of Swanage Railway trains – and keeping our passengers and staff safe – while being an important part of the team which I love,” he added.

Born in Dorchester, Jonathan has returned to live in Dorset’s county town after travelling and working in France, Switzerland and South America for several years.

While in Argentina, Jonathan was a volunteer who helped to run an after-hours school club. The 49-year old also set up and ran a free city walking tour in Buenos Aires for four years that was ranked the best tour on Trip Advisor.

The Swanage Railway and South Western Railway are both members of the Purbeck Community Rail Partnership which aims to develop rail travel in the Purbeck area and has been in existence for more than 20 years.

To find out more about the work of the Purbeck Community Rail Partnership, visit purbeckcrp.org.uk.

The Swanage Railway welcomes new volunteers and anyone interested in finding out more should contact Swanage Railway volunteer recruitment and retention officer Jonathan Evans on 01929 408466 or email [email protected]. 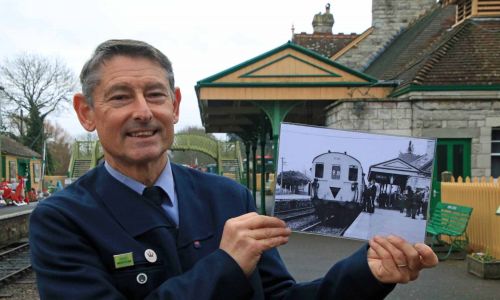