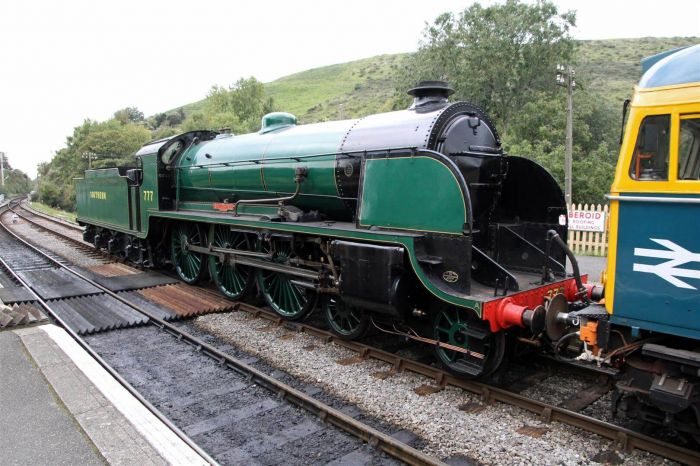 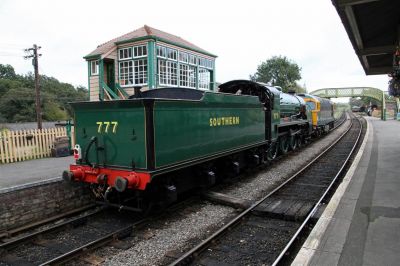 Majestic King Arthur class locomotive No. 777 'Sir Lamiel' has arrived on the Swanage Railway to star in the award-winning heritage line's three-day Autumn Steam Gala during which six locomotives – spanning more than half a century – will be in action.

The Southern steam event takes place between Friday and Sunday, 16 to 18 October, 2015, inclusive, with more than 50 years of locomotive development being put through its paces.

The N15 class locomotive – built in 1925 and named after one of the fabled Knights of King Arthur's Round Table – arrived by road at the Swanage Railway's Norden station on Tuesday, 13 October, 2015, and was hauled to Swanage by ex-British Railways Southern Region Class 33 diesel-electric locomotive No. 33 201.

The Autumn Steam Gala will feature a frequent passenger train service between Norden, Corfe Castle, Harman's Cross and Swanage – as well as nostalgic and evocative goods trains from yesteryear.

It is the first time that No. 777 'Sir Lamiel' has visited the Swanage Railway in more than five years.

Swanage Railway General Manager Matt Green said: "It's was great to see 'Sir Lamiel' arrive on the Swanage Railway and pass T9 No. 30120 on the service train at Corfe Castle.

"No. 777 looks absolutely tremendous and is a fine locomotive – a real thoroughbred. Our locomotive crews can't wait to drive and fire it.

"Our Autumn Steam Gala will be a Southern delight not to be missed with six locomotives spanning more than half a century of engineering development hauling trains from Norden to Corfe Castle, Harman's Cross and Swanage.

Steam gala ticket prices are £25 for an adult day rover and £18 for a child day rover – rover tickets giving unlimited travel on the day of purchase.

Further details are available from http://www.swanagerailway.co.uk/events/detail/autumn-steam-gala.