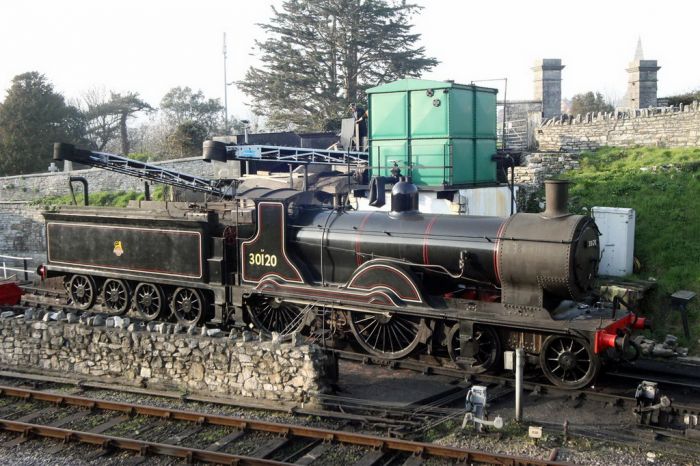 A classic Victorian T9 class steam locomotive has arrived on the Swanage Railway for the first time in more than 20 years - to star in the premier heritage line's first ever London and South Western Railway Weekend.

The special two-day event takes to the five-and-a-half mile Purbeck line from Norden Park & Ride to Corfe Castle, Harman's Cross, Herston and Swanage on Saturday and Sunday, 15 and 16 March, 2014.

It will be the first time that a Victorian-designed T9 class steam locomotive has hauled a passenger train through Corfe Castle since the early 1960s and the days of British Railways.

It will also be the first time that a Victorian-designed M7 tank locomotive has been seen operating through Corfe Castle with the T9 since the early 1960s - a pairing that was a familiar sight on the Swanage branch from the 1930s.

After arrival at Norden station by road from the Bodmin and Wenford Railway in Cornwall, London and South Western Railway 'Greyhound' No. 30120 was hauled to Swanage on Friday, 7 March, 2014.

And on the afternoon of Wednesday, 12 March, the locomotive - built at Nine Elms in 1899 and part of the National Railway Museum's National Collection - was separated from its tender and turned on the turntable at Swanage so it now faces south.

It will be the first time in some 20 years that two Bulleid coaches have together carried passengers on the Swanage Railway while the M7 tank is the only working M7 class steam locomotive in the world.

Swanage Railway General Manager Richard Jones said: "A special timetable is being introduced so the two Victorian locomotive-hauled trains pass each at Corfe Castle station - beneath the Medieval ruins - to maximise the spectacle and photographic opportunities as the Victorian days of old are re-created.

"We are very grateful to the Bodmin and Wenford Railway - and the National Railway Museum - for allowing the T9 to visit the Swanage Railway, bringing part of our national heritage collection to Dorset," he added.

Built at Nine Elms in London in 1899 by the London and South Western Railway, T9 No. 30120 hauled main line express trains in the south and west of England.

When it was in a Southern Railway green livery and numbered No. 120 in 1991, the T9 was loaned by the National Railway Museum at York and spent three years hauling trains between Swanage and Harman's Cross.

Richard explained: "The visit of No. 30120 is important and very historic because it will be the first time that a T9 steam locomotive hauls passenger trains to Corfe Castle since the British Railways days of the early 1960s.

"Along with the Dugald Drummond-designed M7 tank No. 30053, No. 30120 is the archetypal Southern branch line steam locomotive with the T9s having hauled passenger and freight trains to Corfe Castle and Swanage for some 40 years from the 1920s.

"The T9s were nicknamed 'Greyhounds' because of their turn of speed and, when first built, were used on express trains between London and Plymouth when there was fierce competition between the London and South Western Railway and the Great Western Railway for transatlantic liner passengers.

"The T9s worked widely over many parts of the Southern Railway network - including, of course, on the Swanage branch," he added.

The London and South Western Railway Weekend will see the shop and buffet coach - serving drinks and snacks - open at Swanage station. There also a buffet coach at Norden station.

At Corfe Castle station, the exhibition and cinema coach next to the goods shed museum will be open - together with the next door Book Wagon selling good condition second-hand books, railway videos as well as model cars and trucks.

Special fares apply for the Victorian weekend and day rover tickets - giving unlimited travel for a day - are £15 for adults and £10 for children.