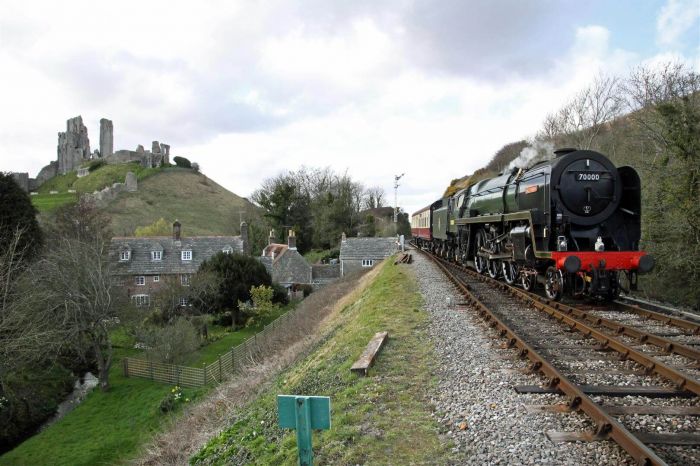 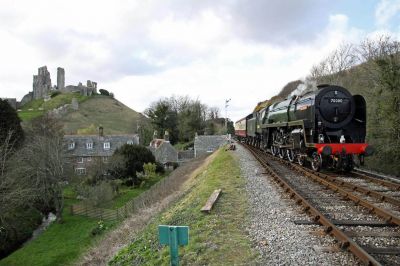 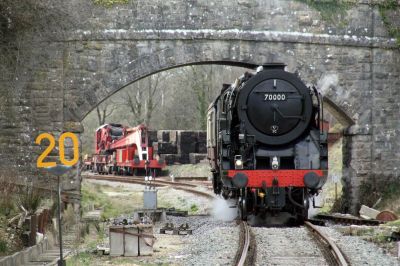 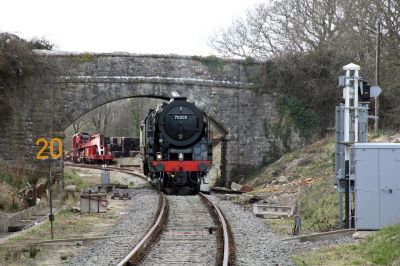 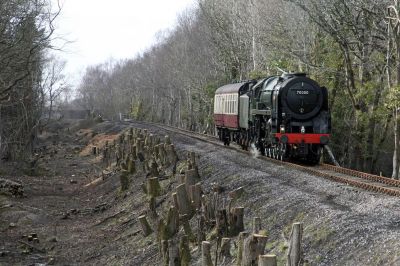 An historic and powerful trail-blazing steam locomotive that hauled the poignant funeral train of the Queen's father – King George VI – has arrived on the Swanage Railway to be the second star of the award-winning heritage line's Spring Steam Gala.

Majestic No. 70000 'Britannia' – the Concorde of its time that hauled express passenger trains at up to 90 mph – arrived on the Swanage Railway just after 5pm on Tuesday, 31 March, 2015, after a seven-hour rail journey from the West Somerset Railway via Bristol, Salisbury and Southampton.

The historic locomotive will be hauling service trains on the Swanage Railway for the first time as it stars in the heritage line's Spring Steam Gala from Friday, 17 April to Sunday, 19 April, 2015 (inclusive).

Prince Charles rode on the Royal Train behind 'Britannia' in January, 2012, when he re-dedicated the locomotive which hauled his grandfather's funeral train back in 1952.

The 94-ton leviathan of steam was the first of almost a thousand new Standard class post-war steam locomotives and was built by British Railways at the start of the new Elizabethan era of the 1950s – summing up forward-looking optimism after almost six years of the grinding and costly Second World War.

'Britannia' had the honour of hauling the funeral train of King George VI,  from King's Lynn in Norfolk to London, after the monarch's death in February, 1952.

The second star of the Swanage Railway's three-day Spring Steam Gala will be the classic and powerful 1930s 'Schools' class main line express No. 925 'Cheltenham' from the National Railway Museum's prestigious National Collection.

It will be the first time that both 'Britannia' and 'Cheltenham' have hauled passenger trains between Norden Park & Ride, Corfe Castle, Harman's Cross and Swanage.

Swanage Railway Interim General Manager Matt Green said: "We're delighted to be able to run 'Britannia' on the Swanage Railway for the first time because she is so historic as well as being such a magnificent and powerful steam locomotive.

"We are extremely grateful to 'Britannia's owners, the Royal Scot Locomotive and General Trust, for giving us this marvellous opportunity to run such an impressive locomotive through the Isle of Purbeck countryside and past the ruins of Corfe Castle. It will be an impressive sight certainly not be forgotten.

"Built in early 1950 at Crewe, 'Britannia' was the first of 999 new Standard class locomotives – of varying sizes and power classifications – to be built by the newly created British Railways with the design combining decades of railway knowledge and experience into the best possible engine.

"Back in the steam days of the 1950s and 1960s, the Standard class seven 'Britannia' hauled prestigious express trains at up to 90 mph as well as heavy freight trains in the east and north-west of England. On the Swanage Railway, she won't be running any faster than 25 mph," he added.

No. 70000 'Britannia' was built at the British Railways engineering works in Crewe, Cheshire, during 1950 and was completed in January, 1951 – being allocated to Stratford depot on the Eastern Region of British Railways.

The 15-year old locomotive was withdrawn from Newton Heath depot in Manchester during May, 1966 – the year that England won the World Cup against West Germany at Wembley – and put into storage.

In 1969, the year that man first landed on the Moon, 'Britannia' was purchased by a group of enthusiasts – returning to steam on the Severn Valley heritage line eleven years late in 1980.

The late 1980s saw the 94-ton majestic leviathan of steam restored to main line running condition and 'Britannia' is based mainly at Southall in west London, for servicing and maintenance during main line excursion work.