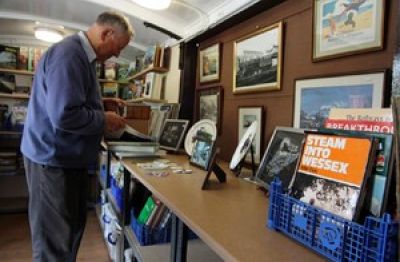 An Aladdin's Cave of fascinating books, magazines, DVDs, transport ephemera and even jigsaws comes to Corfe Castle station on the weekend of Saturday and Sunday, 18 and 19 July, thanks to a special annual sale.

Open from 9.30am to 4pm on both days, the fund-raising event for the Swanage Railway takes place in the yard next to the newly refurbished good shed museum, exhibition coach and cinema coach.

With the prices for books starting from just £1, admission to the railway and transport book sale in and around the Book Wagon – a restored Edwardian railway box van dating from the era of the London and South Western Railway – is free.

"Items received are carefully checked and used first and foremost to add to our extensive archive.

"Duplicate or surplus items are sold to raise funds for a variety of railway projects, including the restoration of locomotives and rolling stock.

"The Swanage Railway is very grateful to its many supporters," explained Mr Green.

The green timetable is in operation during the book sale weekend with an alternate steam and heritage diesel rail car trains running every 40 minutes throughout the day.

Visitors to the railway and transport book sale can also park at the attended Purbeck District Council car park next to Norden station and take the train to Corfe Castle.