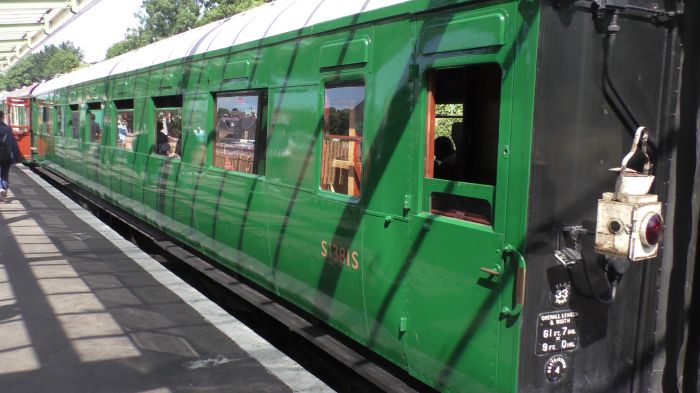 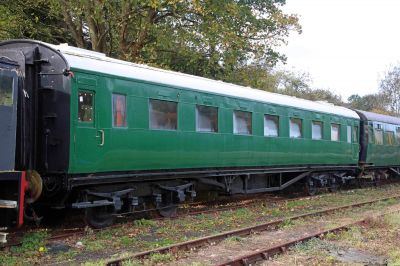 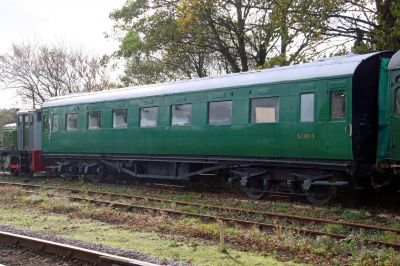 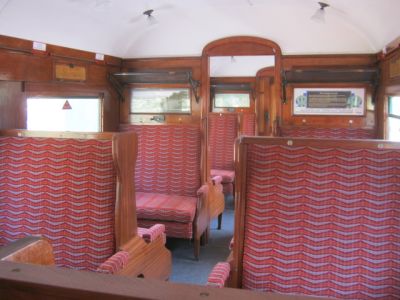 This vehicle, built in 1930, heralded a new dawn for interior carriage design as it was completely “open” (ie there were no compartments) and would seat 56 people. Little is known of its movements as it spent much of it’s life as an operational spare or “loose” coach, although, for a short period at the end of the 30s it did appear in Bournemouth line 6-car set No 248.

The policy of keeping spare vehicles came under review in the early 1960s and any coach over thirty years old was withdrawn from traffic. By 1962, unlike many similar vehicles, 1381 hadn’t been scrapped but was stripped out internally and had its corridor connections removed and plated over. Renumbered DS 70175 it became a mobile Staff & Tool van for the Engineering Dept and allocated to Horsham.

Eight years later 1381 was declared surplus and put up for sale by competitive tender. Unfortunately, the Swanage Railway’s bid wasn’t high enough and the coach was sold to a scrap metal dealer and then moved to Micheldever sidings near Winchester for its final journey. It continued to remain there for some time and this enabled the Railway to negotiate a purchase price with the dealer and it was then bought by a railway supporter. With the coach deemed fit to travel for one journey it accompanied Southern Railway BY van No 13 to Wareham from where it was taken by road to Swanage.

There was much work to do and it wasn’t until 1985 that the coach entered service providing additional capacity on some of the early trains on the newly formed Swanage Railway. Sidelined for repairs 1381 was parked in the railway’s sidings but once again after many hours of painstaking restoration work the coach is back in service and carrying passengers between Swanage and Norden.